I held a fun run on 13th September to trial the new NCE control system and we had a nice time just running things here and there.  Thanks to Alex, Barry, Chris, Don, Peter S and Ross for coming to help me test the new system which functioned well.
We enjoyed some afternoon tea and stories after the session.
I forgot to take any pictures....

Tom is back!  He has recorded two shows this month and I was lucky to be included on Show #204.
Don't forget to subscribe, check his website for future show times and join in if you are able.

Back In May I outlined the Future Operations Strategy following an "operator survey". In June I started the new paperwork and that has continued this month.
Session 1 now has a new schedule, Job cards and Switch lists which can be viewed in the links below:
Timetable   Schedule   Operator Job Cards   Hornertown Yardmaster   Switch Lists
These will be tested on 11th October at the next ops session.

I was lucky to get to two sessions this month.

Barry, Chris, Don, Peter S and I joined Ross for his ops session and we had fun for about one and a hlf hours then Ross somehow put his throttle into programming mode and every loco (approximately 20 of them) ended up on the same address - a big Ooops.  All throttle are now set to programming on the main mode to eliminate a reoccurance!
So we had an early afternoon tea! - I forgot to take pictures again....
Ross has let us know that all has been fixed ready for the next session.

Alan, Des, Don, Hugh and Ross join me at Wayne's to operate using Wayne's new running schedule.  We found a few bugs however we had an enjoyable afternoon and we kept occupied for longer periods with the new schedule.

Afterwards we had our usual debrief over afternoon tea. 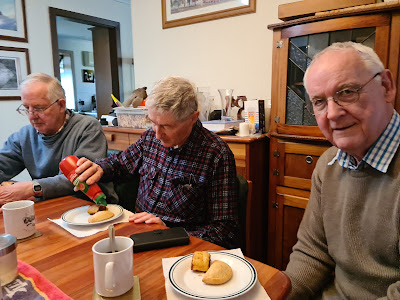 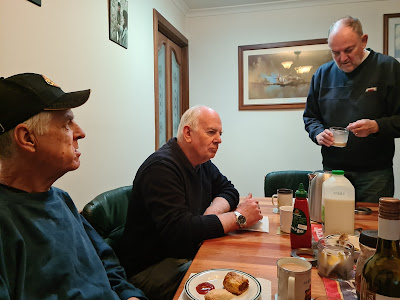 I hosted a session on 27th that Barry, Chris, Don, Peter S attended and we watched a selection of stuff.  This was accompanied by the usual afternoon tea and discussion.

This month we have been dealing with some more family matters however I made it to one Monday round robin session, received the first delivery of the new control system, completed two more speedometers and got to two opserations sessions at Wayne's.

The first delivery hyas been received. 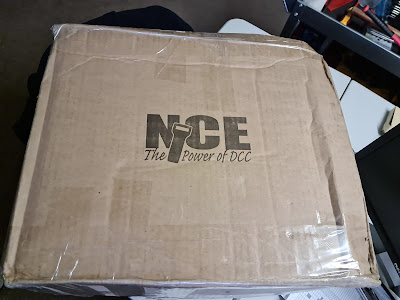 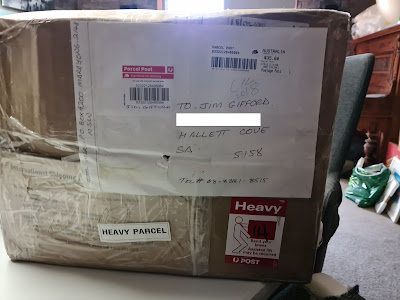 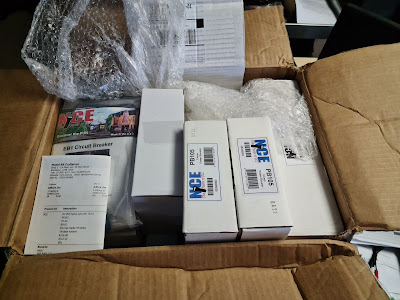 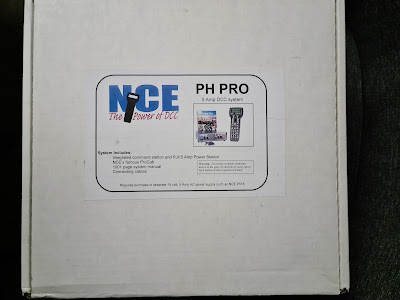 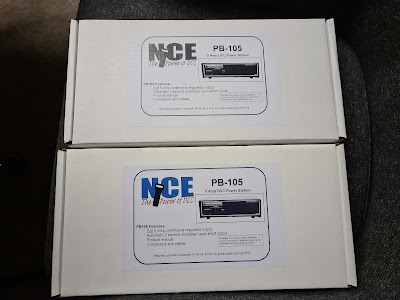 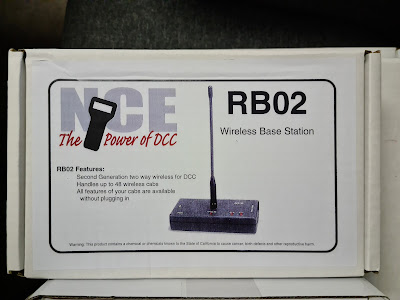 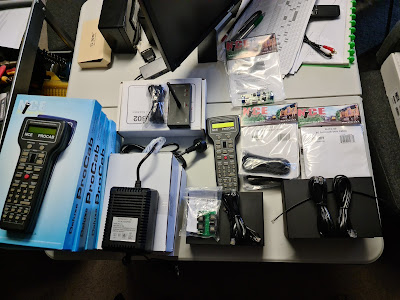 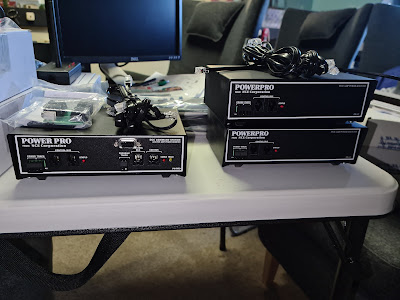 Two more Boosters are on back order.  In the meantime I will use the command station booster to power up one section before it eventually is assigned to accessories.
I didn't get the RS232 to USB cable as they were out of stock so I have ordered one from Amazon so it shoukd be here in around a week - even express post is slow these days.
I need to set the track voltage on each of the boosters to the same as my old system 17V - By doing this I will not have to adjust the speed of all my locos.
Planning for final locations of the new items is underway. Some of the existing wiring such as the throttle LAN is the same configuration in both systems so connections will be made.  Removal of the old Roco System will take place prior to installation and setup of all the components.
I need to install a chassis ground between boosters which did not exist with the old system and I will change the route of the Control Bus to by-pass an area I have not been happy with in the past.
This week I have connected the Command Station Booster to Power District C and a short video below shows the first operation of a switcher at Jimtown.

I finished building speedometers for Don and Des.
Details of the prvious build can be found here. 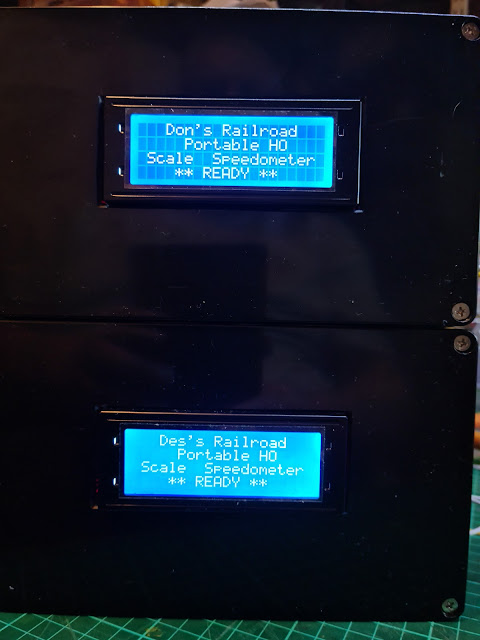 I was lucky to get to Wayne's twice this month after being a "reserve operator" for one session.

This was the first Ops Session for the month with Alan, Don, Hugh, Murray & Ross we had a good session.  It was the last session of the old timetable being retired after a number of years.

Afterwards we had the usual debrief and refreashments. 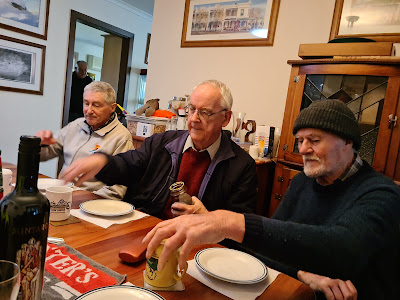 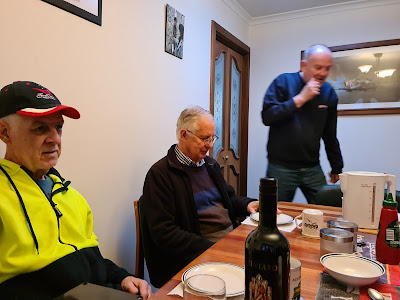 The second session for the month with Chris, Don, Des, Peter J and Peter S.  I was initially third reserve but as others could not attend got an invite.  It was the first session of Wayne's revamped timetable consisting of 5 Operations Sessions per cycle.  He generally operates two sessions a month.
I scored Yardmaster at Lowood Crossing for the whole session that lasted around 2 1/2 hours.

Afterwards we enjoyed the debrief over afternoon tea as per usual.  Overall we thought Wayne had done a good job with the redesigned session.

This month I was unwell for a week or so then have been dealing with family matters and only got to one opserations session at Wayne's as the second one was cancelled due to a seven day COVID lockdown.

I am still waiting for confirmation of when my order will arrive.

I was lucky enough to get to Wayne's this month after being a "reserve operator" for two sessions last month.
Along with Alan, Don, Hugh, Murray & Ross we had a good session.

We enjoyed afternoon tea afterwards where we recounted the afternoon's activities and a few other topice too... 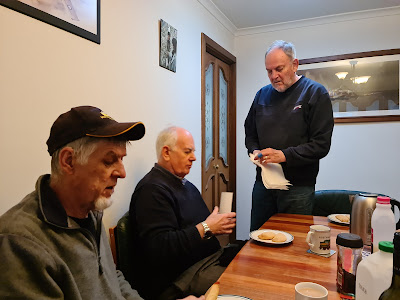 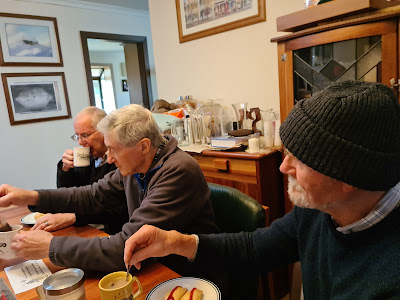 This month has seen confirmation of order for the new control system and work on the revised schedules.  I was away from home assiting family for a couple of weeks then I have been unwell so it has not been as productive as anticipated.

I have confirmed my order for NCE equipment with the Australian distributor Model Rail Road Craftsman Shop and delivery is anticipated to be late July or early August.

Work on the new schedules for all trains has commenced.  There are 135 different movements in the schedule which have had travel times updated due to improving the efficiency factor as outlined last month.
Below is an example of a schedule. 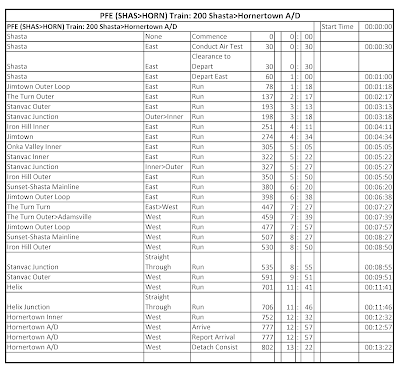 Each of these movments have an associated train graph which will be used a component of the overall operating session train graph.  I have processed 26 so far so still a long way to go.....
Below is an example of a graph. 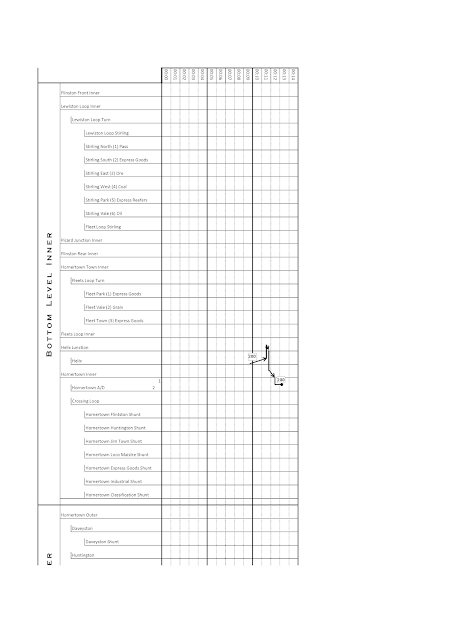 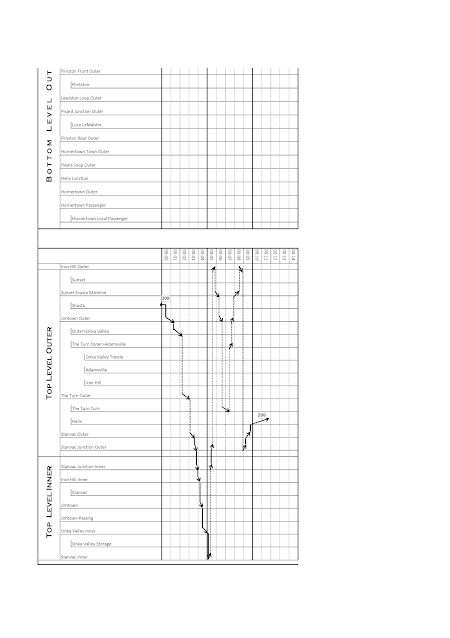 The previous Session 1 had 39 movements excluding those in the main yard this will reduce with the reduction of crews from 5 to 4.
What gets included in the new Session 1 is still to be decided.

This month I had my first Ops session after nearly two years but we had significant problems resulting in a new control system has been ordered.  Changes to my operating strategy are proposed.  I have been helping Rosslyn on the Sandgate & Southern and attended an Ops Session at Wayne's.

On Monday 17th May I ran session 4 again - the one that failed way back on 1st July 2019....
Wayne, John, Barry, Chris, Peter J and Alan joined me.
Being my first session in a long time I did not have any time to take photos as I was way too busy!
Well a number of faults appeared - half a dozen turnout failures, loco control problems and I discovered that my operators had forgotten lots of details, maybe the old saying "if you don't use it, you loose it!" has some meaning here.....
In the end I called time so a tidy end to operations did not happen so trains are all over the layout in various states' which means at some time in the future I will need to fix that.
We enjoyed afternoon tea following the session.
Recently there has been discussions that we are all getting older, take longer to do things and can't last as long as we did...   This has resulted in a reassessment of my operations strategy as I have the longest sessions of any group member.

Despite all the work with the new booster the loss of control of locos in that power district have caused me to make a decision to replace my existing Roco system.
Whilst on the tour of USA, Canada and the UK back in 2016 it was clear that clubs and large layouts used one of two systems, NCE and Digitrax.  I have had some exposure to Digitrax with Peter R from Traralgon in the past and I was lucky to meet Jim Scorse in Indianapolis at the NMRA Nationals.
I think his NCE product will suit my needs best.
I have contacted the Australian distributor Model Rail Road Craftsman Shop and placed an order.

I have decided on a NCE Procab Radio System with hammerhead throttles.  I will need four boosters, seven throttles a computer interface.

I will replace the separate MRC system which I use for accessories by adding a EB 1 Circuit Breaker to the command station for those accessories.

There are supply issues worldwide at the moment so I will just have to wait my turn to get the components.

Following on from fleeting discussion and comments within our group about operating sessions I decided to ask all my operators for feedback to four questions:
I was very pleased with the level of response and in summary opinions offered were:

Overwhelmingly a maximum of 2½ hrs with a preference towards 2 hrs.

Most thought the current arrangement works ok, however, there was a definite recommendation that any shunting job should have an engineer and guard to reduce pressure on the operator and achieve “more fun” as two heads are better than one with shunting puzzles.  Conversely some thought a maximum of six people.

Perhaps move to a system of job cards similar to Wayne’s where all jobs apart from Yardmaster and local goods taking most/all of the session such as the “Jimtown Turn,” are done by the next available crew.

Train others to work the panel to allow me to wander and assist like Wayne does – for those that remember like when Derek was around….

Pull the plug based on maximum operating time – same as Wayne’s.

Stations have labels showing what stations are East or West.

Turn outs in Hornertown yard be numbered on the panel and ground – similar to Wayne’s.

So my grand plan will be massaged to suit on-going needs and I will be making the following changes:

So new schedules for all trains and changes to accommodate the timetable changes.  The most time consuming will be the train graphs to ensure the schedules actually will work.

I have been assisting Rosslyn with wiring issues over the last couple of months in order to remove some gremlins that have been haunting her.  She has removed the vast majority of the old 5 cab DC wiring as paert of the process.
We have been installing the CD units I made for her about two years ago as well.
Things are progressing and Rosslyn will have a shakedown run again soon.

Wayne has decided to limit the total number attending his operating sessions so he has introduced a roster system to ensure everyone gets their fair share of sessions.  I am 3rd reserve for the second session this month so looks like I won't be there...